Will We Wake up? (Engelse taal)

Will We Wake Up? is about the hidden forces behind the world stage that are striving for a New World Order. Are we living in a time of transition or in ‘the end of times’? Since 11 September 2001 (9/11), everything accelerated. What is going on? Why all of a sudden all these big brother techniques: cameras, satellites, drones, artificial intelligence, robots, various passports, DNA databases, scans, biometrics, the rapid roll-out of 5G? Will total control and manipulation of our minds eventually become possible through the implantation of a subcutaneous microchip in relation to the Internet of Things? Are our freedom and privacy fundamentally threatened?

Suppose that much of what you have learned is not true. That you have been manipulated unknowingly all your life with ideas about religion, politics, economics, history, education, health, war and peace. Suppose you find out that lies have become truths.

How would you feel? Deceived? Upset? Angry? Disappointed? Sad? Or relieved, because deep in your heart you already knew, but never dared to speak out? But your silence is to the advantage of those who manipulate us and have been deceiving us for a long time.

The first edition of this book was published in October 2006 and quickly became a bestseller. ‘Surely this can’t be true? This is doom and gloom,’ many people said at the time. In 2021, it turns out that some of these predictions have come true, which is why this book is more in demand now than ever.

Will We Wake Up? is about the hidden forces behind the world stage that are striving for a New World Order. Are we living in a time of transition or in ‘the end of times’? Since 11 September 2001 (9/11), everything accelerated. What is going on? Why all of a sudden all these big brother techniques: cameras, satellites, drones, artificial intelligence, robots, various passports, DNA databases, scans, biometrics, the rapid roll-out of 5G? Will total control and manipulation of our minds eventually become possible through the implantation of a subcutaneous microchip in relation to the Internet of Things? Are our freedom and privacy fundamentally threatened?

Will We Wake Up? reveals shocking facts, but also shows that especially in these critical times, mankind can make an enormous leap in its evolution of consciousness through knowledge and understanding.  But then we will have to wake up collectively as soon as possible…

Marcel Messing is an anthropologist, philosopher and author.

One phenomenon that Jung intrigued, fascinated and perhaps even haunted and later associated (partly) with archetypes was the occurrence of curious coincidences.

For Jung, the seemingly unrelated events involving the table and the knife were connected in a meaningful way. As another example, Jung gives the treatment of a young woman who, at a critical moment, had a dream in which she was given a golden scarab. As she told Jung this dream, he sat with his back to the closed window. Suddenly he heard a soft tapping sound behind him. He turned and saw an insect tapping against the window outside. Jung opened the window and caught the insect as it flew in. It turned out to be a rose beetle (Cetonia aurata), which is very closely related to the scarab and which, contrary to its usual habits, had apparently felt an urge to enter a dark room at that particular moment.

We all know these kinds of curious coincidences. For example, you think of a friend you haven’t seen or spoken to in years. Actually, you never thought of him all these years, and now he’s suddenly in your head. Moments later, the phone rings and it’s your friend. Jung found it hard to believe that these kinds of “events” were just random occurrences. There had to be more going on. For example, when, as Jung points out, Emanuel Swedenborg had a “vision” of a fire in Stockholm, at the same time there was a real fire raging there, with no demonstrable or even conceivable connection between Swedenborg’s vision and the fire.

Emanuel Swedenborg (1688-1772) was a Swedish scientist, philosopher, theologian and mystic. He is the inspirer of ‘Swedenborgianism’.²⁴⁹ After a visit to England, Swedenborg arrived in Goteborg on Saturday 19 July 1759. He and fifteen others were guests of William Castel, a prominent merchant, in a house on Canal Street. About six o’clock Swedenborg left the party for a while and returned pale and very excited. Asked what was going on, he said a dangerous fire had just broken out in Stockholm and it was spreading quickly. He was restless and often went out into the garden. He said the house of a friend he mentioned was already in ashes and that his own house was about to catch fire. At eight o’clock, after being outside again, he exclaimed with relief, “Thank God! The fire is out, three doors from my house!” Some of the other guests, also residents of Stockholm, had become very concerned by now.

On Monday evening a messenger arrived from Stockholm, who had been sent by the Council of Commerce while the fire was still raging. The letters he brought with him described the course of the fire exactly as Swedenborg had outlined two days earlier. On Tuesday, a royal courier arrived at the governor’s mansion with the sad news of the fire, reporting the extensive damage and loss suffered. This second account of the fire, like the first, was in no way different from Swedenborg’s description of it at the time the fire was going.

“In the 1970s I settled in the bustling city of Groningen to study mathematics. An intriguing and fascinating study, but I switch and eventually become an agricultural engineer. The combination of these two, mathematics and agriculture, will come to play a prominent role in my life later on. Before that, I was co-owner/director of a Training and Advisory Group for another ten years. However, a major event makes me take a different path.

A new adventure. I will write articles, books and scripts and make a number of documentaries on subjects that all have a spiritual undercurrent. I am apprenticed to a shaman and immerse myself in various aspects of remote viewing and hyper intuition. All in all, an exciting and fascinating adventure that continues and continues to unfold…”

Award-winning author, adventurer, explorer and flamboyant storyteller
The structures of his past educational activities, the spiritual underpinnings of his books and films, the many shamanic experiences, the out-of-the-box aspects of remote viewing and hyper intuition, but above all his motivation to share all this with the world ultimately form the foundation of what Bert Janssen is today:

One of the most high-energy, mind-boosting performers, storytellers, and inspiring trainer-entertainers of our time. In swirling and sparkling performances, filled with drama and booming dynamite, he shares astonishing things and razor-sharp, to-the-point analysis with his audience. He suggests things that you not only learn a lot from, but that you can also use hands-on. Add to that an unstoppable enthusiasm and a good dose of humor and it will be clear why his performances reverberate for a long time.

Bert Janssen can be heard regularly on the radio. Such as  Coast to Coast  with host George Noorey,  Unknown Country  with host Whitley Strieber,  VoiceAmerica  with host Randall Libero,  Virato Live! ,  Alan Steinfeld ,  Argusoog Radio ,  Healing Sound Radio ,  Co-Creator Radio Network , and many more. In addition, Bert has appeared in several TV programs and has appeared in many documentaries.

Will We Wake up?

About the hidden powers behind the world stage. 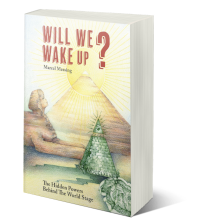